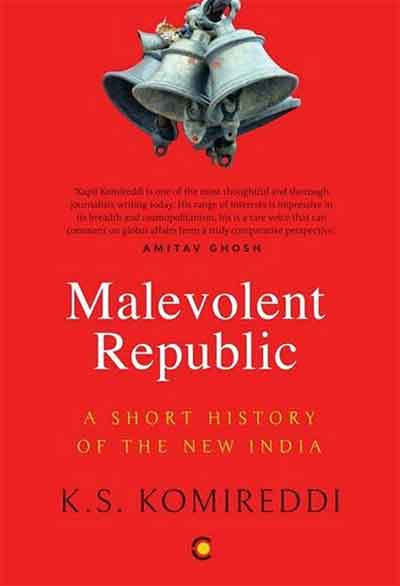 Debutant writer K.S. Komireddi’s book “Malevolent Republic: A Short History of the New India” is a political commentary on Narendra Modi’s rule from 2014 till now.

The author observes, India under Narendra Modi’s rule cannot be understood without reference to Gujarat under him. He was chief minister when the communal riots killed more than 2,000 Muslims in that state.

At that very moment, Modi’s political career should have ended, but instead, some 12 years after the riots in Gujarat, he has become the Prime Minister of India.

This means that failing to stop the riots is not a disqualification in Indian politics anymore, rather it turned out to be a ladder of success for Narendra Modi and his phenomenal rise on the national stage.

Now Modi is applauded as the most competent leader that India has ever produced.  He is considered a  man who has solutions to all the problems India faces now.  This is reflected in the votes for his party which are in fact the votes for his leadership.  This is a new trend in Indian politics and the author calls it a “Malevolent Republic.”

According to Komireddi, this new phenomenon is an epoch-making trend in India. It has heralded the birth of a “second republic”, meaning India founded in 1947 by Congress is dead and Modi through his indurated Hindutva ideology has recast the Indian republic as the Malevolent Republic.

According to the author, the demonetization move which wiped out 86% of the currency in circulation was Modi’s sinister masterstroke. Though Manmohan Singh rubbished the allegation as “organized loot, legalized plunder”, the likelihood of diverting huge amounts to BJP’s coffers for electoral use and financially draining other political parties into a sort of scorched earth policy has yet to be probed.

It is not to say that Komireddi has glossed over the perfidies of other political leaders such as Indira Gandhi and Rajiv Gandhi who were edifying in their governance and politics the contours of Hindu nationalism and that has grown so rapidly since the 1980s. Narendra Modi  just sat  on the rising tide and crowned himself to glory, the author writes.

Komireddi further observes that Prime Minister Narendra Modi instead of directly engaging the nation with political and people-friendly practices of dialogue and discourse has reduced the Indian democracy to ‘Mann Ki Baats’, road and stage shows, and other such kind of gimmicks.

“India will leap to a point from which return will become extremely difficult if Modi remains in power at the head of a government with an absolute majority in Parliament… If he succeeds, Hindu nationalism will become the official animating ideology of the republic, if Modi succeeded and remains in power for the third term,” cautions Komiredd.

The book is well-documented and highly readable. All discerning Indians and their well-wishers should read it, and if possible act on them.