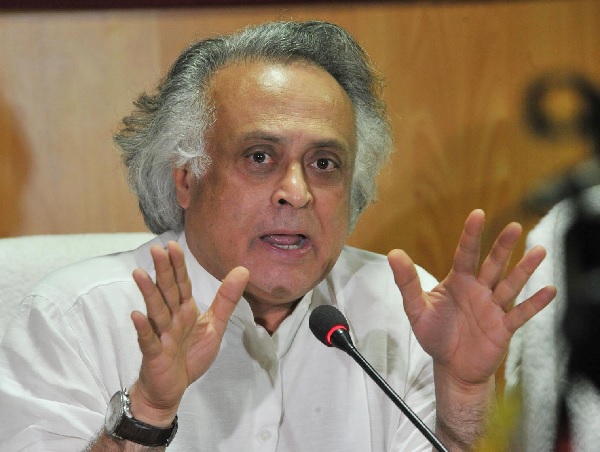 Kolkata : The Narendra Modi government has made mockery of “a good idea” like Aadhaar by implementing it “horribly”, says Congress leader and former union minister Jairam Ramesh.

“I never expect aadhaar for airline tickets, bank accounts, mobiles…this is ridiculous. They (the Modi government) have made mockery of Aadhaar,” he told IANS in an interview on the sidelines of the Tata Steel Kolkata Literary Festival.

Further, Ramesh said, “People are dying because of Aadhaar card as they are not getting ration, pension without the biometric card. Aadhaar is inducing deaths of people.”

“All the environmental laws are being weakened and diluted. Ministry of Environment has become a rubber stamp body. In the name of ease of doing business, it is being tweaked to favour industry…they are trying to weaken National Green Tribunal, forest conservation laws,” he said.

Criticising the river-linking project, Ramesh said, the “Ken-Betwa river linking project, of which Modi is going to lay the foundation stone soon, will destroy the Panna Tiger reserve in Madhya Pradesh.

The technocrat-turned-politician also took a swipe at Modi for his speech at the World Economic Forum (WEF) at Davos.

Addressing world leaders and global corporate honchos at the plenary session of the WEF, Modi dwelt on the threat of climate change.

“Prime Minister Modi goes to Davos and gives big bhashan (lecture) on environment and climate change. But his actions are entirely different.

Asked about the present government’s role in the United Nations climate change conference, he said: “Now, BJP is parroting what I said in Cancun in 2010 that all countries must mitigate. BJP and (Arun) Jaitley criticised me. Now, the same thing you are saying nine years later.”

Lauding the erstwhile UPA government for putting the country’s economy on a higher growth trajectory, he said whatever the Modi government is doing is by building on the success of previous governments.

“When Modi talks about high growth, he forgets that during the ten years of UPA government (2004-2014), the average rate of annual growth was 7.4 per cent, which was quite high. In fact, in the last two years, the growth has been lower than the long term average. We hope the growth will recover from the next year onwards.”

In this context, Ramesh gave credit to the P.V. Narsimha Rao government and the then Finance Minister Manmohan Singh for delivering a landmark budget in 1991 with a direction of liberalisation.

“In the last 26 years, we have had six Prime Ministers. Nobody has changed the direction of 1991 (for economic liberalisation) given by Narasimha Rao and Manmohan Singh. In the last three decades, the Indian economy grew on an average of almost 6.6 per cent per year. So it is a huge achievement.”

Ramesh also criticised the Modi regime for demonetisation and the way the new indirect tax was implemented.

“I personally feel that the (current) slow down of economy is not irreversible. Demonetisation was a bad idea implemented badly. Goods and Services Tax (GST) was a very good idea implemented poorly. So both these shocks have combined to reduce economic growth,” the Rajya Sabha member said.

He accused the BJP government of failing to create employment and instead destroying jobs.

“Jobs are not only not being created but destroyed also. For the first time, in IT industry in Bangalore (Bengaluru), jobs are being destroyed. Job creation is a very serious issue today. This is not being created because investments are not taking place. The investment rate in India today is less than 28 per cent of GDP which is the lowest in the last 35-40 years.”