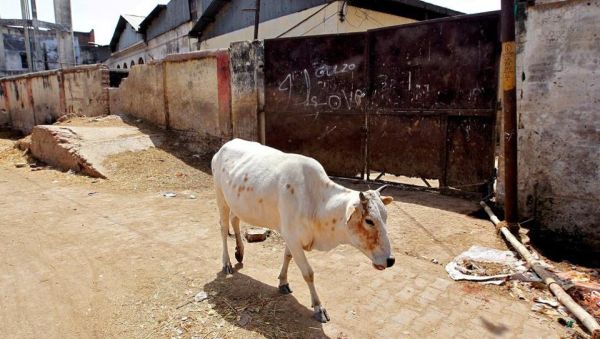 Kanpur/Lucknow: Mohammad Shafiq, 52, lives with his family in a small hutment in a graveyard in Kanpur’s Idgah Colony, and used to earn his living by procuring meat from the nearby government slaughterhouse and selling it by the roadside.

Across the state, numerous shops and slaughterhouses, including government-run abattoirs, were sealed, leading to severe shortage of meat and affecting the livelihoods of thousands like Shafiq who made a living by using common government abattoirs for a small fee.

Essentially, failure of municipal administrations to upgrade these facilities had destroyed the vast unorganised meat industry, and hundreds of thousands of ancillary jobs.

Now Shafiq hawks churan (tangy powder), tamarind and jamun around town and his son deals in scrap. “I make Rs 200-250 a day while he manages between Rs 75-125,” Shafiq said.

From meat-selling, Shafiq used to earn Rs 400-500 within three hours. “The meat, fresh from the slaughterhouse, would sell quickly. We don’t have refrigeration, so I would only buy as much as I could sell easily. Any leftovers, the family would use,” he said.

The Prevention and Control of Pollution (Uniform Consent Procedure) Rules of 1999 list slaughterhouses under the “red” heavily-polluting category with potential to adversely impact public health.

In Uttar Pradesh, as in the rest of the country, a range of agencies regulate slaughterhouses. Foremost among these is the state-level pollution regulator, the Uttar Pradesh Pollution Control Board (UPPCB), which gives a “no-objection certificate” for setting up a slaughterhouse after getting a go-ahead from the top district administrator. Once a slaughterhouse is set up, the UPPCB monitors its functioning to ensure pollution control measures are in place.

If the facility is for export, approval is also required from the Agricultural and Processed Food Products Export Development Authority (APEDA). Slaughterhouses must also follow the Prevention of Cruelty to Animals (Slaughter House) Rules, 2001, as well as obtain a license from the Food Safety and Standards Authority of India (FSSAI) to ensure all animal-derived food is healthy.

Many slaughterhouses have been accused of violating norms, and the National Green Tribunal (NGT) is hearing a string of petitions seeking their upgradation or closure. In May 2015, hearing one such petition, the NGT ordered all slaughterhouses running without requisite permits in Uttar Pradesh to be shut.

When the new BJP government assumed office in March this year, it began to take action on the NGT order.

Both private and government-run slaughterhouses were shut, having failed to upgrade despite the 2015 NGT order, a previous Supreme Court order and reminders by the UPPCB.

According to the Uttar Pradesh Municipal Corporation Act, 1959, the construction and maintenance of public markets and slaughterhouses is an obligatory duty of the local corporation.

Of the 77 APEDA-approved slaughterhouses in India, 44 are in Uttar Pradesh. In addition to these, municipal corporations and nagar panchayats (city councils) run numerous abattoirs to meet the domestic meat requirement.

While India registered a 3.33 per cent decline in livestock population during 2007-12, Uttar Pradesh saw a 14 per cent growth, indicating the economy’s dependence on livestock and allied businesses.

“I support modernisation, but the government should have made an alternative arrangement before closing it down. A gradual phase-out would have helped everyone,” Shafiq said.

At the Sunday cattle market in Tirwa village, about 15 km from Kannauj city in central Uttar Pradesh, very few transactions were taking place as farmers were not getting the price they were quoting.

This was largely due to enforcement of the NGT order. The more recent central government ban on sale of cattle for slaughter in cattle markets — currently on hold following a Supreme Court order — is yet to be implemented on the ground.

“Last year it was notebandi, and this year it is meat bandi that has reduced demand,” said Arjun Singh, a farmer from Achanakapur village. He was seeking Rs 50,000 for a young female buffalo, but was getting offers of Rs 32,000.

Since the slaughterhouse crackdown, farmers are unable to fetch good prices even for milch cattle because buyers are worried they will be unable to resell.

“What if a buffalo is unable to breed? No other farmer would touch it. Should we keep spending on its fodder or sell it to a slaughterhouse? Why can’t the government understand this simple logic?” asked a farmer at a cattle market in Chaubepur village near Kanpur.

Brajal Kumar Dwivedi, a young farmer from Jaisinghpura village, wanted to sell a mother-calf buffalo pair for Rs 90,000. He was getting offers of up to Rs 70,000. “I bought it last year for Rs 80,000 from Sakipur mandi, had it fed and impregnated, and am still unable to get the price I paid,” he said.

The Pechbagh hide market in Kanpur, the largest in India for buffalo skin, has also seen trade decline over the last couple of years.

“Fear of cow vigilantes who beat up transporters even if they are transporting only buffalo skins has scared away suppliers,” said Akhtar Hussein Akhtar, a godown owner at Pechbagh and an office-bearer of the local Hide Merchants’ Association.

Akhtar explained that large, mechanised slaughterhouses sell hides directly to big tanneries, and only those engaged in skinning dead animals sell to merchants in Pechbagh. “[Earlier] most of the supply came from government abattoirs while weekly supply from villages filled the gap.

Supply has gone down from 10,000 hides per month to 500. “We have also reduced our employee strength from eight workers to just one now,” he said.

According to the All India Meat and Livestock Exporters’ Association, Uttar Pradesh’s meat industry employs nearly 2.5 million people. But there’s a stark difference between the formal market consisting mostly of wealthy exporters and the informal community of butchers, meat suppliers and those trading in animal byproducts.

While the former own mechanised, well-equipped slaughterhouses that usually have the requisite permits, the informal market is dependent on government-run abattoirs, most of which have now been shut down for failing to comply with rules.

The crackdown has therefore skewed the market in favour of big companies, which have thus far been engaged in export of buffalo meat.

“Big companies are making tidy profits as the cattle market has tanked due to no demand from butchers. On the other hand, shortage of meat in the market has caused its price to increase. So, the companies can buy animals at a low price and sell meat at a premium,” Dharmendra Malik, General Secretary of the Uttar Pradesh branch of the Bharatiya Kisan Union (BKU), told IndiaSpend.

Businesses are happy to tap the market not open to them earlier. “People are not very keen on the frozen meat we supply as they are used to getting raw and fresh meat from the city abattoirs. But that option is not available now. We are currently supplying 3-4 tonnes of buffalo meat per day to Kanpur and hope to scale it up to 30-35 tonnes,” Abhishek Arora, owner of AOV Exports Limited, told IndiaSpend.

Butchers, however, are unhappy at being compelled to buy from large companies. “Around a fourth of our earnings come from selling of waste material from slaughter. Entering into an agreement with the company means to let go of this profit,” said Shahabuddin Qureshi, General Secretary of Qureshi Foundation, an association of butchers and meat-sellers in Lucknow.

Many said an ideal solution would be to set up an alternative slaughtering site away from habitation until the government abattoirs are modernised.

“When an animal is slaughtered, around 20 people get work. There are the meat sellers, those who trade in animal skin, those selling bones and hooves, and then there are people who process the fat for sale to soap factories,” said Ahmad of Jamiat-ul-Quresh.

“Now the meat sellers with licenced shops are the only ones able to do some business. All others have been rendered jobless.”

(In arrangement with IndiaSpend.org, a data-driven, non-profit, public interest journalism platform. Manu Moudgil is a freelance consultant with India Water Portal. The views expressed are those of IndiaSpend. Feedback at respond@indiaspend.org)