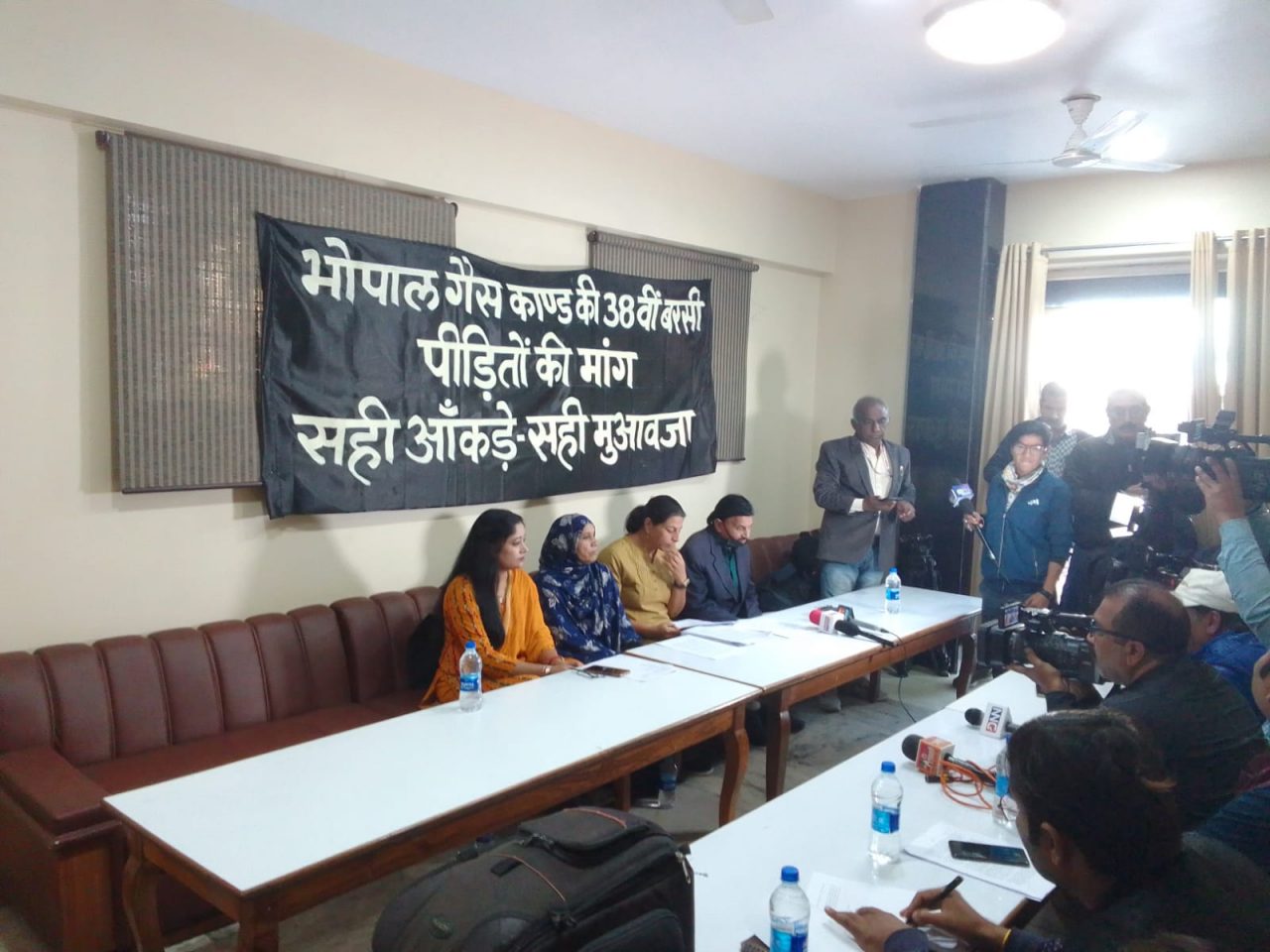 BHOPAL – At a press conference held on the occasion of the 38th anniversary of the Union Carbide disaster in Bhopal, leaders of five survivors’ organizations expressed hope that the Madhya Pradesh Government will fulfil its promises of presenting correct figures of death and health damage caused by the disaster in the soon to be heard Curative petition before the Supreme Court.

The leaders announced that they will be leaving for Delhi later in the day for their rally at Jantar Mantar tomorrow on the issue of additional compensation for the disaster from Union Carbide and Dow Chemical.

Rashida Bee, president of the Bhopal Gas Peedit Mahila Stationery Karmchari Sangh, a trade union of women survivors of the disaster said: “Recently on November 17, the Principal Secretary of Bhopal Gas Tragedy Relief and Rehabilitation of the Madhya Pradesh Government assured us that the state government will present correct figures of death in the Supreme Court and also state that the victims suffered permanent and not temporary injury. As a similar promise was made at the 27th anniversary of the disaster without action matching words, we will remain apprehensive till it is actually done”

With regard to other broken promises of the Madhya Pradesh Government, Balkrishna Namdeo, president of the Bhopal Gas Peedit Nirashrit Pension bhogee Sangharsh Morcha said: “At the 36th Anniversary of the disaster, the Chief Minister had promised lifelong pension to all women widowed by the gas disaster. Yet, as per official records 569 women widowed by the disaster have not received any pension so far.” He said “If the state government breaks its promise of presenting correct figures of death and health damage it will be misleading the apex court by its act of omission.”

“On the occasion of the 26th anniversary of the disaster, the state government had committed itself to setting up a Special Cell for close monitoring of all legal proceedings related to the Bhopal disaster”, said Nawab Khan of Bhopal Gas Peedit Mahila Purush Sangharsh Morcha. He said that while the Special Cell remains to be set up till today, it is indeed frustrating to watch the state government’s counsel remaining quiet during the proceedings of the Curative Petition last month.  “We hope during the hearing on January 10 next month, the state government’s counsel will argue for the revised figures of death and injury.” he added.

Said Nousheen Khan of Children Against Dow – Carbide: “We are pained by the trail of promises broken by the state government but we continue to hope that on this critical matter of securing legal rights to adequate compensation of the Bhopal survivors, the state government will deliver its promise. She opined that in the words of legendry Urdu poet Mirza Ghalib, we hope for loyalty from those who do not know what loyalty is.” (Humko unsey wafa ki hai ummeed jo nahee jaantey wafa kiya hai).

Meanwhile, the organizations of survivors of the Union Carbide disaster in Bhopal has expressed gratitude to the members of UK Parliament who have signed on to an Early Day Motion (EDM) tabled in the Parliament on November 28 last.

It may be pointed out here that 40 members of the Parliament including representatives from five political parties and three independent MPs have signed on to an EDM that calls for those responsible for the disaster to be brought to justice, calls upon Dow Chemicals, the owner of the Union Carbide, “to urgently rectify the environmental damage and properly compensate the victims”.

The survivors commended the work of Bhopal based journalist late Rajkumar Keswani, who had pre-warned about the impending disaster much before it actually occurred through his tabloid which he edited.