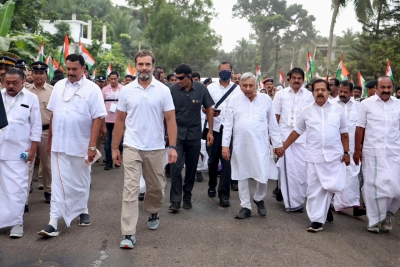 The Congress’ Bharat Jodo Yatra has entered the third state, Karnataka after Tamil Nadu and Kerala in its 3570 km Kanyakumari to Kashmir march.

New Delhi, Oct 1,2022:  The Congress’ Bharat Jodo Yatra has entered the third state, Karnataka after Tamil Nadu and Kerala in its 3570 km Kanyakumari to Kashmir march.

Congress leader Rahul Gandhi said that no power could stop this yatra, whatever happens the yatra will not stop. On entering Karnataka he asserted that the reason for the yatra is to listen to the people and tell them about the Opposition whose voices are muzzled.

He said on Friday, “Greetings to Karnataka – the land of the great Guru Basavanna, whose teachings of building an inclusive society is the guiding light of #BharatJodoYatra. We have come to listen to you. This Yatra is the voice of the people of Karnataka.”

The Congress has tried to put up a united face in the yatra and the cadres are enthusiastic. “All I have to do is walk, the Congress will take care of the rest,” says Michael, Youth Congress district general secretary, Thiruvananthapuram. He has immense faith in the Bharat Jodo Yatra and the party.

The Congress wants to connect with the voters and after completing its Kerala leg, the Bharat Jodo Yatra entered Gundlupet town in Chamarajanagar district of Karnataka. Rallies have been planned in Gundlupet, Mandya, Mysuru, Chitradurga and Bellary. The yatra will enter neighbouring Andhra Pradesh through the state’s Raichur district.

The yatra in Kerala traversed over 43 of the 140 assembly and 12 out of the 20 Lok Sabha constituencies and covered 453 kms in 19 days, which included a two-day break.

The participation in the yatra saw about 5,000 people in the morning session and the crowd swelled to 25,000 in the evening session with leaders from all rungs joining in. The party appears to have got a much needed boost. 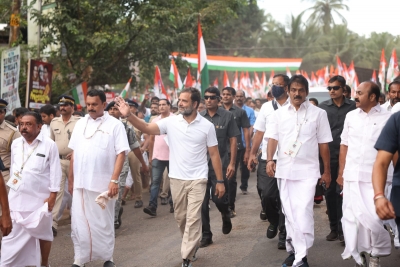 D.K. Shivakumar, Congress state president along with other leaders, is putting in special efforts to make the yatra a huge success. He had toured all across the state and entrusted the leaders with specific responsibilities of gathering party workers and the common people to walk with Rahul Gandhi.

From the day it entered Kerala from Tamil Nadu, it was a festival for the Congress party workers and its supporters, as was seen throughout even as the confusion to elect a new party president continues.

The highlight of the event was that the Congress leaders in Kerala, who are known for their factional feuds, stood in solidarity with the party and kept aside their differences. Similarly in Karnataka both the factions of Siddaramiah and DK Shivakumar are putting up a united show.