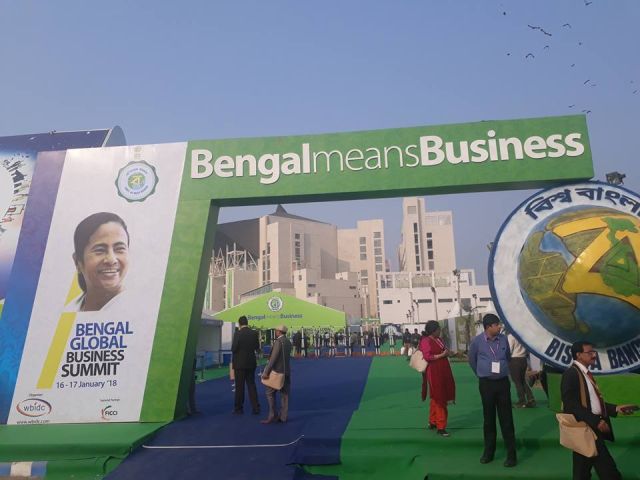 Addressing delegates on the concluding day of the meet, she said 50 per cent of last year’s business proposals and those of previous years were “in the process” of implementation.

“The new investment proposals for this year that we have received is about Rs 2, 19,925 crore. It may go up also,” she said.

The state’s opposition parties – the Congress, Bharatiya Janata Party (BJP) and the Communist Party of India-Marxist (CPI-M) – had on Tuesday demanded a white paper from the government on the number of proposals the state had received in the earlier summits and those that had fructified.

Banerjee on Wednesday said: “Whatever we discussed about the business summit… you cannot say that we only discuss or give hopes. We talk less, work more.

“Even last year, of what we discussed, 50 per cent of the businesses (proposals) are in process… Earlier also, the situation was like this.”

State Finance and Industries Minister Amit Mitra told reporters that of the total investment proposals, the manufacturing and infrastructure sector netted investment commitments of Rs 1,56,811 crore, “which is significant”.

Among other major sectors, the micro, small and medium enterprises (MSME) and textiles attracted business proposals of Rs 52,952 crore, hospitality and tourism got Rs 1,483 crore, IT &ITes Rs 1,146 crore, animal resource, food processing, fisheries and agribusiness Rs 1,518 crore and health, education and skill development got Rs 6,015 crore worth of proposals.

According to the state government, the 2015 summit fetched investment proposals worth Rs 2.43 lakh crore and the 2016 edition over Rs 2.5 lakh crore.

Business announcements worth over Rs 2.35 lakh crore were received by the state in the last edition of the summit.

Terming the fourth edition of the business summit a “successful event”, Mitra said 1,046 B2B and 40 B2G meetings were held in the summit and, in all, 110 MoUs was signed.

“The perceptional change about Bengal was visible from the participation of delegates from India and abroad who expressed their business interest in the state,” he said.

As many as 350 international delegations from 32 countries including Japan, Italy, Poland, Korea, Czech Republic, Germany, Britain, France and UAE and over 4,000 delegates participated in the fourth edition of Bengal Global Business Summit held at the sprawling Biswa Bangla International Convention Centre at New Town, Rajarhat here.

Foreign delegates from Korea, China, Germany, Italy and other countries have shown interest in the manufacturing sector, Banerjee said.

Thanking Reliance Industries Chairman Mukesh Ambani for his Rs 5,000 crore investment proposals, she said the investments would create a large number of employment opportunities in the state.

“If you calculate all together, with whatever business proposals we have received, employment for more than 20 lakh people will be created,” Banerjee said, adding that industries and agriculture were growing hand-in-hand in the state.

According to him, Dassault Systems signed off with Indian Chamber of Commerce for setting up a design centre while Apparel Export Promotion Council announced the setting up a skill development centre.

Uber and Ola signed pacts with the state Transport Department to increase employment opportunities for the youth.

Among big ticket MoUs is signing of pact between state government and Poland’s Silesian region and state Power Department inked agreement with GIZ (Germany) towards an Energy Action Plan for the state.

The Chief Minister described the state as “the investment destination”, as it had political stability and labour, talent and a business-friendly environment.

According to her, West Bengal is strategically placed for businesses for Asean countries, including neighbouring countries of Bangladesh, Nepal and Bhutan and the northeastern states of India.

“Bengal deserves to be a global industrial hub,” she told delegates at the summit.

“We are a united and cosmopolitan family. There are no differences on caste and creed. Tolerance is the key. If you don’t tolerate people, you would not get the results,” she said.

Banerjee also announced that national carrier Air India would commence its services from the Greenfield airport at Andal near Durgapur in the state to Delhi from January 28.

The next year’s summit will be held on February 7 and 8. “Next year, one day will be dedicated to the world business summit and the other day for conclaves,” Banerjee said.