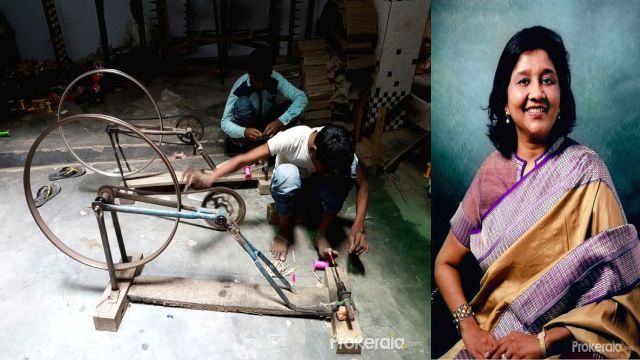 New Delhi : Amid the ‘khat-khat’ of the traditional handloom at the Turkish envoy’s residence here, a family of Banarasi weavers crafted a pink-golden saree even as their patron and textile revivalist, Smriti Morarka, underlined the need to bring handloom weaving back through experiencing it.

Calling handcrafted Banarasi weaves artful and an “object of permanence” — something that would easily spark memories of one’s grandmother’s prim and proper sarees — Morarka, who has been engaged in preserving weaving traditions for the past 21 years, said the onus of revival now lies with the youth.

“The young generation is moving away from the traditional weave, and if they want it back, the responsibility is theirs to own. These days we just want to weigh everyday with money and match the right-hand side column; but these are works of art, and art requires patronage,” Morarka told IANS on Wednesday.

The responsibility to revive, she added, also comes with that of experiencing authentic weaves.

“The tongue, say, can identify a synthetic ice-cream from a real one. Who taught you that? Some past experience. You need to build that experience. Fabrics like these are about the touch, feel and view.

“So, if you see it enough, touch it enough, feel it enough, only then will you get there. If I tell you three things to look for, the people making it in powerloom will cover those three things first. So it’s about awakening your inner eye to see these things. You can’t sell it as a notebook, you can’t tabulate it as points,” she said.

Part of the experience Morarka mentions, also comes down to watching weavers in action. While rotating and separating the yarn, and sitting down to painstakingly build a saree thread-by-thread and knit-by-knit might seem like an elaborate process itself, it is usually preceded by more processes.

Each Banarasi weave can take up to four weeks to six months to make, depending on a number of factors, which the revivalist segments into several phases.

“The design is hand-drawn, the inspiration for which can come from anywhere, it may be sculpture, architecture, painting, another old fragment found somewhere. Then comes deciding the gauge — often called print in fashion parlance — which is deciding the scale of the design. In Benaras, we work with jacquarding or replication of the design,” Morarka, whose mother had established Jnana Pravaha, an institute for cultural studies in Varanasi, said.

“We cut a jacquard and run a sample of the weave. Then the yarn is dyed by the master rangrez (colourist). It is then put on the loom, coloured, dyed in all its glory. Only then the bride is ready for her procession.”

The Banarasi handloom weave, revered for its elegance, is making a comeback, despite the mass production of the powerloom, the weavers said, adding the need for patronage.

“Each weaver can earn up to Rs 6,000 for one saree. People are wearing it more, and stability in their usage also means stability for our income and work,” one of the weavers told IANS, adding that the beauty of Banarasi weaves is unmatched.

Morarka exhibited her handwoven sarees from her brand Tantuvi here, at the invitation of the Turkish Ambassador. She will also exhibit at the Taj Palace here in January.