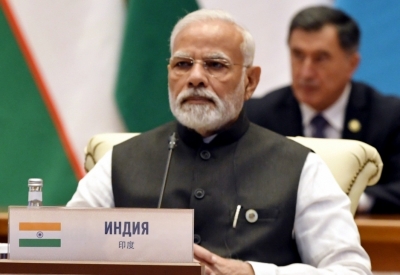 Addressing the 22nd Shanghai Cooperation Organisation (SCO) Summit here on Friday, Prime Minister Narendra Modi said that as the world faces challenges of economic recovery after the global Covid-19 pandemic, the role of the SCO is very importan

Samarkand, Sep 16,2022: Addressing the 22nd Shanghai Cooperation Organisation (SCO) Summit here on Friday, Prime Minister Narendra Modi said that as the world faces challenges of economic recovery after the global Covid-19 pandemic, the role of the SCO is very important.

He went on to say that the ongoing crisis in Ukraine and the global pandemic have led to disruptions in global supply chains, leaving the world facing unprecedented energy and food crises.

Hence, the SCO should strive to develop “reliable, resilient and diversified” supply chains in the region, Modi added.

The Prime Minister announced the establishment of a new working group on startups and innovation, adding that the country is also making progress towards becoming a manufacturing hub.

He said that India’s economy is expected to grow 7.5 per cent this year, which is the highest among the world’s biggest economies.

He also spoke about food security, which he termed as a major challenge, and suggested that the cultivation and consumption of millets could be a possible solution.

The Prime Minister called millets “superfood”, adding that it could be a nutritious and low-cost alternative to overcome the food challenge.

Modi went on to say that 2023 will be celebrated as the UN International Year of Millets and “we should consider organizing a ‘Millet Food Festival’ under SCO”.

In his address, he also touted India as one of the most affordable countries for medical and wellness tourism and urged the SCO member nations to cooperate in the field of traditional medicine.