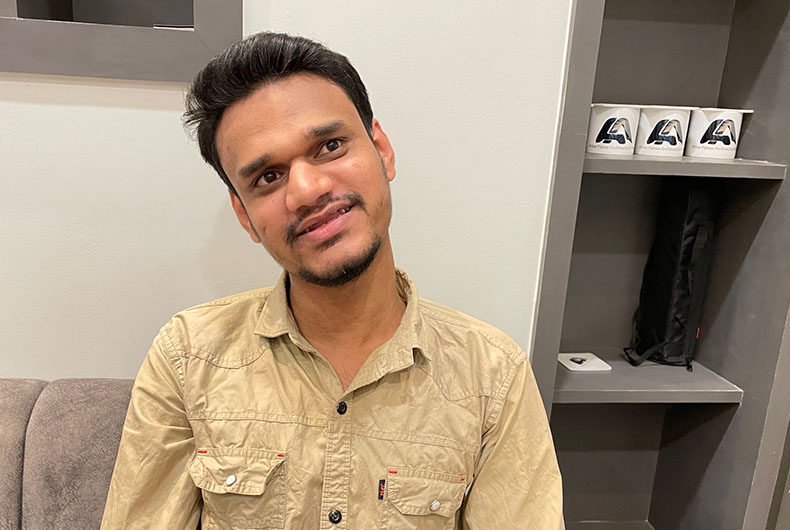 Before him, Akbar Ali had done P.G. B.Sc. in GIS and RS from Pune University in 2009 after completing M.A. in Geography. Akbar is currently working as GIS Team Lead at Genesys International Corporation Mumbai.

Affan now wishes to join Survey of India, the National Survey and Mapping Organization of the country under the Department of Science & Technology for internship.

Talking to umid.com Affan said he had deep interest in Geography and when he joined KTHM College Nashik for graduation he learnt about Geographic Information Systems (GIS).

“Besides regular courses, KTHM College also runs certificate course in GIS and Remote Sensing. Realizing my interest in the subject, my teachers, especially Shazia Ansari, advised me to enrol for this course as well while doing BSc. It really helped me when I joined Bharti Vidyapeeth for the PG course MSc in Geoinformatics”, he said.

Affan said he had actually wanted to take admission in Pune University for PG course in Geoinformatics and had also appeared for the entrance test conducted by the university. Since the admission process in Pune University got delayed and in the meantime he received a call from Bharti Vidyapeeth University he decided not to miss the chance.

“After about two months, I received call also from Pune University. I however decided to stay put at Bharti Vidyapeeth”, he said.

Affan belongs to the Katthewala family of Belbag area of Malegaon. Excellence in academics is not new to this family as Affan’s sister Barira is MSc in Botany, his uncle Dr A Majid Katthewala, now Coordinator at Mohammadia Tibbiya College and As Sayer Hospital Mansoora, was among the first to opt for offshore job.

Affan’s cousin, Asif Katthewala, who was his mentor in Pune, is an IT Professional working in a multinational company, and his cousin sister Saima Firdaus had topped Pune University in MSc Mathematics final back in 2009.

The extraordinary success the family has achieved is not without challenges. Affan’s grandfather, Abdus Salam Katthewala, died when his father Shahid and other brothers were still young. Later, his three uncles – Arif, Javed and Haroon, too died in quick succession – leaving the family once having a flourishing business struggling for livelihood.

Besides, Affan also had to face some academic challenges during the training period. It was because Geography was his major subject and the course included a lot of topics related to Information Technology.

“To become familiar with advanced IT tools and programming software like Core JAVA, Pyhton, C Sharp and others was really a daunting task, and required a lot of hard work to overcome”, he said.

Affan had chosen digital mapping and analysis of the impact of the Pandemic in Malegaon for his project titled ‘Use of Spatial Analysis and GIS in the study of Covid-19 affected areas of Malegaon’. For this he designed, developed and mapped the available data highlighting digitally the Red, Green and Orange zones and comparing the Covid cases in each of these zones with their population.