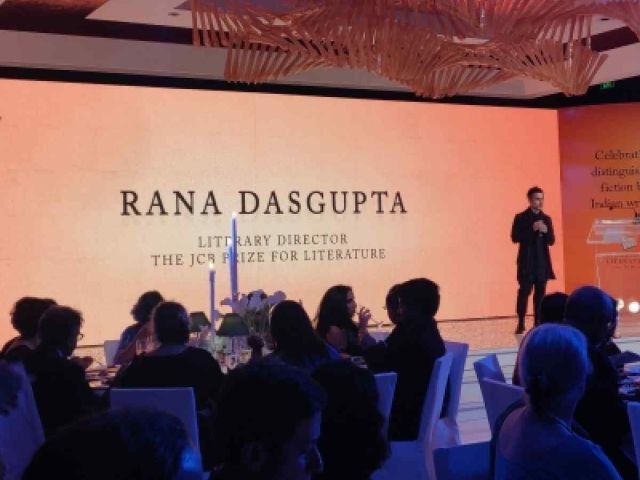 The Who’s Who of Indian literary circles assembled at a five-star hotel here earlier this week to attend the announcement of the winner of the inaugural edition of the JCB Prize for Literature — conceptualised on the lines of the Man Booker Prize — at a specially curated dinner. It was a saga steeped in hypocrisy.

This correspondent confirmed his presence at the last moment and was allotted a seat. Next to me was a Public Relations executive from Britain, who had flown in to explore ties with the prize, seeking to establish opportunities for the shortlisted books — Perumal Murugan’s “Poonachi or The Story of a Black Goat”; Shubhangi Swarup’s “Latitudes of Longing”; “Amitabha Bagchi’s “Half The Night Is Gone”; Anuradha Roy’s “All The Lives We Never Lived”; and Benyamin’s “Jasmine Days” — in the UK. Or so he said.

Fortunately for me, he had attended the Booker Prize dinner, which is touted globally for its extravagance and the luminaries who attend it year after year. “But even by Booker standards, this is too grand,” he said, adding that nobody in the UK would spend this kind money on such an event.

On seeing the name inscribed on the table card of the person to my left, I realised we had exchanged several emails and had engaged in conversations over telephone but never met in person. He was earlier a publicist and was now writing for a leading website. I introduced myself — and we laughed at the coincidence of finding ourselves next to each other. The lady sitting across me was a known face too — a regular on the festival circuit — and looked at me curiously. I could sense that she wanted to initiate a conversation but just then a well-dressed man in an extravagant outfit, walked up to the stage to begin the evening’s proceedings.

He was the British Indian novelist and essayist Rana Dasgupta, the Literary Director of the prize. He welcomed the audience, introduced the prize and left everyone in suspense, saying the prize would be announced when the main course was served.

Most people in attendance had not known who he was before the announcement of this prize, but he was surely the one in limelight and journalists seeking to interview him had a tough time as requests were not entertained. Dasgupta had his own company to keep, and was surrounded by bigwigs for most of the evening.

Back at the table, the lady sitting across me, finally said: “Have we met before?” I reminded her that I had interviewed her on the sidelines of the Serendipity Arts Festival in Goa two years ago — and that we had just been introduced by, let’s call him “the man of books”, before the doors of the hall were opened for the evening, about half an hour ago. How could she forget so fast?

Let’s rewind. The time stated on the invitation was 7.30 p.m. and proceedings began a little after 9. The period in between was when wine did all the talking and informal networking ruled the roost. Debutante Shubhangi Swarup walked around graciously in the company of a reader or two; her proud publisher, Udayan Mitra of HarperCollins, waxed eloquently on publishing her; Poulomi Chatterjee, Editor-in-Chief of Hachette India represented Anuradha Roy, who could not make it to the evening due to a prior commitment; and several other literary heavyweights graced the evening.

NITI Aayog CEO Amitabh Kant could be seen interacting with Lord Bamford, Chairman of JCB, ensuring that he was well in the camera frames. Writer Perumal Murugan, on the other hand, seemed out-of-place. So were several others, but they didn’t show it. Murugan’s dicomfiture was evident.

So what were the top notch of Indian literary circles discussing over wine? That the #MeToo movement has derailed many, that there is a need to separate art and the artist, that literary festivals could not, and should not, single out people on the basis of mere allegations, and that such a glamorous event was long awaited for Indian writing. Ironically, most of these very same personalities have an altogether different outlook on social media and when on stage.

Just as the main course arrived, the winner was announced — Benyamin for “Jasmine Days”. My phone buzzed with twitter notifications almost instantly while I hurriedly emailed a brief report to the newsroom. When I looked up, the crowd was gone, but the food was not. Hardly had anybody finished their meal, drinks had done all the talking all evening.

There is nothing wrong with cocktail evenings, but the suggestion these define the Indian literary space is absurd; and yet they have become synonymous with almost every literary gathering of our times. A literary prize like the JCB should first look at the vast magnitude of Indian writing arising under acute circumstances — in poverty, stress and in unfavourable conditions. One can well bet that the amount spent on the publicity of the Prize exceeded the amount paid to the winner. Turn towards the Sahitya Akademi awardees and the futility of the concept will be evident.

All of this may have been because the Prize is a mere excuse, and not the actual goal. The goal, it seems, is brand building — and that was exactly what was achieved on that glittery evening in the National Capital. If it was not so, the conceptualisation of the Prize must have been a lot different than what it was.

The Man Booker Prize is not an ideal formula to imitate, particularly in the Indian context that is so full of diversity and comprising mostly ignored writers (barring the privileged few, who hover from one festival to another). The JCB Prize did not break this mould, instead it once again underlined the biggest problem for a majority of writers in India — that just a handful rule the roost through a strange monopoly of literary agents, publishers, festival organisers as well as major awards. The JCB Prize for Literature is a new member of the same gang.

And lastly, did the Prize boycott Penguin Random House India, or did the publisher boycott the prize? No one will say a word, (for now) but something fishy surely happened within.

(Saket Suman is a Principal Correspondent at IANS. The views expressed are personal. He can be contacted at saket.s@ians.in )