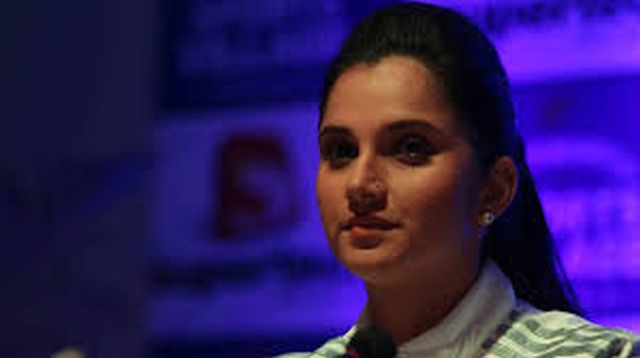 New Delhi : For Sania Mirza, becoming a mother has been “the most eventful thing” in her life, but she is now working on getting herself back on the tennis court. The tennis star says playing at the 2020 Tokyo Olympics seems like a realistic goal, but she doesn’t want to put too much pressure on herself.

“Being pregnant and having a baby was probably the most eventful thing that happened to me, but having said that, it has been over two months now, and I am coming back in shape and losing all the weight,” Sania told IANS on the phone from Hyderabad.

“My fitness trainer is coming in February. And the goal, hopefully, is to try to get back at the end of the year and start playing competitive (tennis) again,” she added.

Sania and Pakistani cricketer husband Shoaib Malik were blessed with a son last October. They have named the little one Izhaan Mirza-Malik.

Her game has always been a priority in her life and she is not losing sight of it even now.

“As a tennis player, life changes very quickly. We don’t know what we are doing from one day to another. But most definitely, it (playing at 2020 Tokyo Olympics) is at the back of my head. Honestly, in 2016, if you asked me if I will be making it to the next Olympics, I would have said ‘no’ and I think I did say ‘no’.

“But now if I do come back at the end of the year, which is the plan, it looks like a realistic possibility. But I don’t want to put too much pressure on myself because I do have an infant in my house.”

The star athlete wants to balance it out.

“We will see how it goes. The goal is to try to get fit again. I have lost a lot of weight already and (to) start training (soon) and getting back into shape… is still a long way ahead. That is why I am giving myself (time till the) end of the year,” said Sania, who got married to Shoaib in a traditional Hyderabadi Muslim wedding ceremony on April 12, 2010.

At the moment, she is enjoying being a mother to Izhaan. She says embracing motherhood has helped her stumble upon some of her own hidden personality traits.

“As women, while we are growing up, we always know that we will get married one day and have kids. And I think we underestimate what our bodies can do — that is produce another human being. And I think that is a realisation you can have when you actually are in that position,” she said.

Sania says earlier everything was about herself as her profession demanded a lot.

But, she added: “Motherhood and pregnancy have made me realise that I can be a very selfless person and I don’t need to put an effort into it.

“I want everything in the world for my child — more than I want for anyone else, including myself. And I think that selflessness you figure out that you have inside you, only after you have the baby.”

The star says motherhood was an “overwhelming (experience) in the beginning”.

“Now I am getting used to it. We both are getting used to a pattern. But this is probably the best feeling that I ever had. Every time he looks at me and smiles, it is the most amazing feeling ever,” she said.

On the drastic changes that motherhood has brought about, Sania said: “As athletes, our whole life revolves around ourselves, our training, our food, our matches and our sleep. And right now it is not. It is the most selfless thing in the world. Everything revolves around him.”

(Sugandha Rawal can be contacted at sugandha.r@ians.in )

nextNew law on quotas: Is the BJP bidding goodbye to economic reforms?