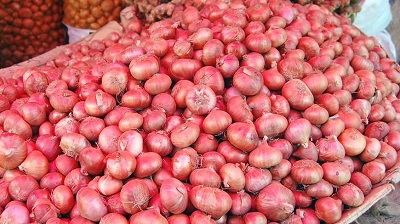 New Delhi : In a New Year gift to onion farmers, the government on Friday increased the export incentives granted for onions under the merchandise exports from India Scheme (MEIS) from existing five per cent to 10 per cent, Agriculture Ministry said.

In an official release it said that the decision will result in better price for onion in domestic markets.

The ministry also pointed out that the onion arrivals have increased in the market due to which the prices in the ‘mandis’ are subdued.

“To contain the situation, it has been decided by the government to encourage exports of onions so that the domestic prices stabilize,” it said.

The ministry said during July, 2018, the incentives were introduced at the rate of 5 per cent. “Now, with the current increase, onions enjoy one of the highest incentives for agro-exports,” it said.

“This timely intervention would help the farmers who have recently harvested their produce and have sowed or recently transplanted their seeds,” the ministry added.